Sail with us to the open sea and leave the hustle and bustle behind. The mountain that kisses the sea
creates fresh air that you can taste. Sun, crystal clear sea and sandy beaches on stone shells. Come
and see for yourself.

Each of our stories begins in the same place, and that is on the main waterfront of Ražanac. We meet next to the ship. Here I will briefly explain to you the rules of the conduct on board. What things to look out for, what to take hold of while entering from the front and rear of the ship and of course the schedule while working with the tool or net, which I threw into the sea the day before. Let’s hope for a good catch and good fun. 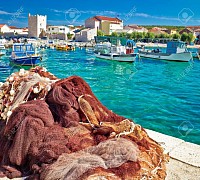 Fishermen for 100 years, a tradition of my family

For more than 4 generations my family has been involved in fishing. So, it was only logical- It’s my
turn now. Around the age of 5, I started fishing on a hook or, as we say, "tunja". At the age of 12, I
started going out to the sea with my father during the summer holidays. When I turned 18, I decided
to do other jobs, but whatever I did, it always drove me back to the sea. So I took over the family
business. Whatever this is, a gift or a curse, I decided to modernize this way of life and share my story with you.
Click to read more ... 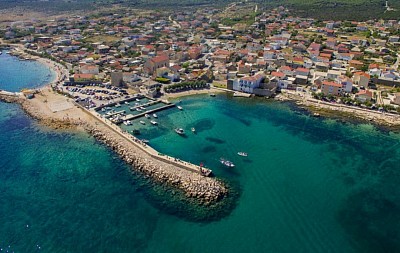 Ražanac is located on the shores of the Velebit Channel in Northern Dalmatia, 22 km northeast of the city of Zadar.

The municipality has 2,940 inhabitants (according to the 2011 census), of which 943 live in the settlement of Ražanac.

The name of the town of Ražanac was first mentioned in 1332 in the list of goods of the Zadar nobleman Vučina Martinušić. However, numerous finds from the Stone Age, a large burial mound from the Early Bronze Age at the Šibenik site, and archeologically unexplored Liburnian graves northwest of Ražanac, at the Gajetovica site, testify to the continuity of settlement since prehistoric times. The most significant remains of the Liburnian culture have been preserved in Radovina and on the Ljuba peninsula, where the artificially created forms of the Venac hill, turned into a natural fortress, are still visible. Although significant remains from Roman times have not been documented yet, the discovery of an early Christian double basilica in Podvršje testifies that during late ancient times the area between the two fertile fields remained the center of settlement. It is assumed that somewhere near the basilica, an ancient temple existed, from whom parts reached the walls of the basilica. This important early Christian monument did not survive the barbarian invasion. It was set on fire and neglected, and the focus of life moved from the gentle valley back to the Ljuba peninsula, a strategic position that was easier to defend in those turbulent times.During the Middle Ages, Castrum Ljuba became a significant fortress in the wider Zadar region. It served as the seat first of the Templars, and then of the Johannites, and after the Venetian conquest of Dalmatia at the beginning of the 15th century, it came into the possession of the Zadar noble family Matafar. In the 15th century, Ražanac was the seat of the parish with the church of Sv. Andrija, and due to its dominant position over the fertile valley, and numerous flour mills, it became the center of the micro-region to which the surrounding places gravitate. At that time, the village was mostly a feudal estate of the Zadar noble family Carnarutis. On May 1, 1507, due to the danger from the Osmans, representatives of Zadar's noble families whose estates were located in the area of Ražanac and the inhabitants of Ražanac and surrounding villages agreed to build a fort on a shallow peninsula by the sea, in Pisak. In case of need, the people of Ražanac could have removed it. As early as 1510, the fortification was completed, and consisted of two smaller and one large tower connected by a wall, which closed the access to the peninsula. With such an appearance, Ražanac is also drawn on the famous map of Northern Dalmatia and Lika made by M. Pagano in the 1930s. In an effort to be as close as possible to a safe haven, the locals eventually moved completely from the position next to the church of Sv. Andrew to the position next to the fort, that is, to the place where the village is still located today.

The fortifications of Ražanac certainly served well in defending against Osman attacks during the Cipar War, when Posedarje, Vinjerac and Poličnik fell, then again during the Kandij War in 1645,  when Halilbeg of Vrana attacked the place without success. However, in 1646, when the Bosnian Pasha Ibrahim came to his aid with 20,000 soldiers, he managed to capture Ražanac, which was set on fire by the defenders themselves. However, the continuity of settlement was not interrupted either. During the entire period of fighting with the Osmans, Ražanac served as a refuge for refugees from the occupied areas, which led to demographic changes, so the population was constantly growing. As the only real fortress in the area from the Novigrad Sea to the Ljubački Gates, Ražanac became the center of gravity of the entire area during the turbulent times. In the middle of the 19th century, a monumental parish church of neo-Romanesque style was built in Ražanac, on the site of an older one, and in 1856 it was dedicated to Our Lady of Rosary. In 1880, Ražanac had 849 inhabitants, making it the largest village within the then Nin municipality. From 1945 to 1962, Ražanac was the seat of the municipality. The place got a school in 1865, water supply in 1913, electricity in 1960, and an automatic telephone exchange in 1990. In 1959, a plastic processing factory was built in the settlement. Finally, in the 1991/92 Homeland War, Ražanac became a center for organizing defense, and the first refuge for refugees from neighboring occupied and devastated towns. Since 1993, Ražanac has been the seat of the Municipality of Ražanac.

Parish Church of Our Lady of Rosary in Ražanac

The remains of the fort of Castrum Liube

Parish Church of Our Lady of Health in Radovina

The Cultural and Artistic Association "Fortuna" operates in Ražanac, which nurtures songs and dances from the area of Ražanac. The Ražanac “kolo-dance” is one of the brightest pearls of Croatian folklore. The Folklore Societies KUD Sv. Šime - Rtina and KUD Radovin are still operating. “Radovinsko orcanje” is included on the UNESCO list of intangible cultural heritage, which protects one of the oldest forms of polyphony. Orcanje is a remnant of ancient Illyrian and pre-Illyrian singing from the area of ancient Dalmatia preserved through the activities of KUD Radovin.